Last week, Chinese yuan touched the A$ 4-month peak. Now it is down.

The Australian dollar and the Chinese yuan touched four-months last week. But in early Monday, they hovered below it because investors pored over the U.S-China trade deal after a decisive UK general election sterling stayed strong.

Last week Beijing and Washington cooled their trade. United States officials reduced some U.S. tariffs in exchange for Chinese purchases of American agricultural and other goods.

The additional tariffs removed on Chinese $160 billion worth of goods in the last-minute agreement. Because of this last week dollar and safe-haven yen pushed down and the Australian dollar lifted, before profit-taking set in.

Senior strategist at Daiwa Securities Yukio Ishizuki said that markets are not very unhappy with the agreement. Still, they will inevitably see some adjustments in position as they approach the holiday period.

China, the U.S, and Yuan 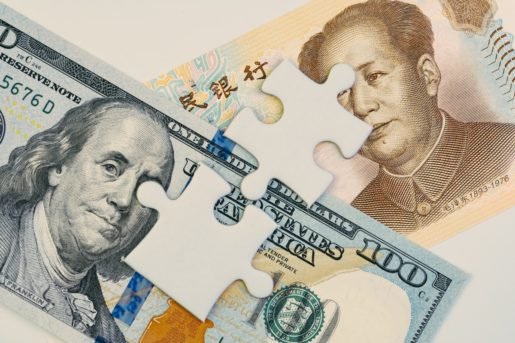 Per dollar, the offshore yuan traded at 7.0026 yuan. It slipped back from a four-month high hit last week of 6.9247 per dollar.

Analysts say that the investors have to wait for the officially signed deal.

In the deal, there is a need for revisions and translations to its text. Nevertheless, Robert Lighthizer, U.S. Trade Representative, said on Sunday that the transaction is “totally done” and it will nearly double U.S. export to China over the next two years. The date for the official signature is not yet determined.

Head of fixed income research at JPMorgan Securities in Tokyo, Takafumi Yamawaki said that they had seen many reports about the differences between the two countries, but now the situation is different.