US President Donald Trump surprised the world yesterday with a $1 trillion economic package to ask Congress for an infusion of $500 billion for direct payments to taxpayers, in addition to $500 billion in loans for businesses. The White House also agreed to invoke a law that allows the government to demand ramping up production of medical supplies in the country, with a note to send two military ships to New York and California. Trump agreed with the Canadian parliament to prohibit all nonessential traffic across their borders. The USDCHF pair previously saw consecutive lows after the uncertainty of Trump’s potential decisions against the increasing cases of coronavirus cases around the world with most safe havens rising against larger currencies, but the American dollar is expected to recover until Trump’s packages will see negative results. 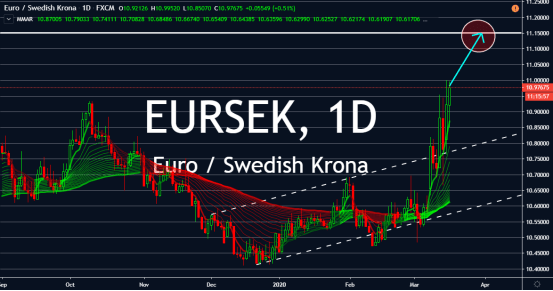 As the threat of a global recession continues to loom, the American dollar is expected to rise against oil-reliant markets. The Russian Ruble in particular is seeing red across most markets, a response to pumping crude oil with increasingly lower prices. However, the USDRUB pair is on its way to becoming eye-to-eye with its 2016 highs. It might face slight resistance once it inches closer to this record since the Central Bank of the Russian Federation just announced a higher than expected USD reserves. The greenback still might see more gains as US President Donald Trump announced a series of moves against the economic and welfare effects of the coronavirus with a $1 trillion package for Congress to pay a $500 billion total to taxpayers and $500 billion in loans for business.  Trump also urged rapid production of medical supplies for welfare with an expectation to send two military ships to New York and California.

The GBPCHF pair just experienced an all-time low for the past two months, and investors are expecting it to dive even deeper. Amid the economic threat brought by the coronavirus pandemic, buyers are collectively flocking over safe-haven currencies, especially the Swiss Franc. The market is also waiting for the Swiss National Bank Monetary Policy Assessment – since CHF has been one of the best-performing currencies in the last several months, investors are counting on its central bank to retain its interest rates at 0.75%. The only way the GBP could find another boost is when the SNB says otherwise. The Pound also isn’t getting any gains since UK Chancellor Rishi Sunak announced a set of “unprecedented” economic stimulus measures for the region: the UK Treasury will offer £330 billion in government-backed loans with an agreement with the Bank of England to buy commercial paper form big businesses to help capital.

Now standing as the epicentre of the coronavirus with the faster spreading of cases than the surrounding areas of its origin, the Eurozone is in for a trying time. Following an almost 5-year low against the Swiss Franc, the EURCHF pair is currently heading further into its volatile although bearish territory. Economists warned that the bloc is ill-equipped to deal with the financial shocks much similar to how it was in the sovereign debt crisis of 2011. In particular, the euro area failed to deliver a fiscal stimulus package akin to the United States, in which President Donald Trump signed an $8.3 billion emergency spending bill to deal with the coronavirus. The only hope the bloc is holding on to is its countries, which individually announced fiscal stimulus programs. Meanwhile, the Swiss Franc continues to perform as one of the best currencies in the past few months – the Swiss National Bank is expected to maintain its interest rates at 0.75%.